Only the Best BBC Micro Games

All of these games are games which I believe were AcornSoft classics in one form or another. Although the BBC didn't have the best graphics for the time, neither did it have as much memory as many people wanted, it did have some very talented programmers.

As early as 1981, Acornsoft were creating unique games for the BBC. They managed to write some excellent adventure games, clones of classic arcade games, as well as the all-time classic: Elite. This page is in dedication to AcornSoft, and the many great games they produced.

All of these game images are still under copyright to AcornSoft/Superior Software. These images are provided so that you do not have to convert your old tape and disk copies over to the BBC. Rather, it's been done for you already.

When you first bought the BBC Microcomputer, this was the piece of introductory software you got with it. This image is the Disk version. There are various programs designed to demonstrate the power of the BBC (Think 1981), including a Biorythms program, a simple bat-n-ball game, a kingdom simulator and pattern generator. It was all quite impressive at the time!

Snapper was one of the first Video Arcade Conversions made for the BBC by AcornSoft. They got this conversion so bang on correct, that a certain arcade manufacturer threatened to sue Acorn. Because of this, the game was later changed: the Pac character changed, and so did the ghosts. Of course, none of this really altered the gameplay, and even today - just like the original Pac-Man - it remains highly playable.

The second Arcade Conversion by AcornSoft, was a straight clone of Williams Defender - and once again, it was quite excellent. Following this hit, AcornSoft started to get quite a reputation for their quality Arcade conversions. It was a reputation that got them into more than one sticky situation with the video game manufacturers. The original Planetoid was named Defender, but was changed for legal reasons. There was also a version called 'Super Defender'.

Another early game by AcornSoft. This one appears to be almost a straight copy of an old Arcade game called Space Panic, and also similar in some respects to Lode Runner. Personally, I loved this game. It was addictive, fast and became very difficult when you got onto the later levels. Even at the start, you could have fun dropping the monsters from the top right to the bottom. You got bonus points for that!

Note: Monsters does not auto-boot. To run, type in: CHAIN"MONSTRS"

Another almost perfect arcade conversion, this one is of Atari's Asteroids. For the time this was a brilliant piece of work. In fact, I don't think anyone ever produced a better version of Asteroids for the BBC. The gameplay was just like the arcade game, and the visuals had been enhanced from the original Black and White graphics. Amazing!

Note: Meteors does not auto-boot. To run, type in: CHAIN"METEORS"

One thing in particular stood out on Arcadians: It was the first BBC game I had seen (at the time) which had a demo mode where the computer played the game itself. All the others had simply displayed the high scores and front screen - Arcadians actually played the game itself. They really tried to make this game faithful to Galaxians. The biggest problem with it is the size of your ship - It's huge!

This was a new type of game for AcornSoft - a sideways scroller. The object of the game was to capture the 'meanies' in holes and then fill them in to put the 'meanies' to sleep. In reality, the game was jerky, flickery and a fiddle to play. But it did introduce a continuous scrolling level which was put to good effect by future games such as the Repton trilogy, Ravenskull and others.

Many people consider Labyrinth to be one of Acornsoft's best games. Released in 1984, it was one of the first sideways scroller games to be published by a major software company. I believe the object of the game was to escape a complex labyrinth, by shooting, and sometimes dodging lot's of bad monsters. Although I never completed, or progressed that far into the game, it was very popular, and several people have requested its inclusion in the archive.

This was a game I missed when I first compiled the archive. I was playing it the other day, and it brought back memories of when I first bought the game. I was always dissapointed that it wasn't as good as Elite, but then I enjoyed the fun of blowing up all the spaceships. Starship Command was neat because of the way you controlled your craft, and the fact that you had an escape pod! Even today, it's a very playable game, and the opening screen animation became immensely popular with Amiga Demo coders in the late eighties!

This was the game that at the time, placed AcornSoft at the top of the BBC Software Scene ladder. If there had been any doubt about that claim prior to Elite, thanks to Ian Bell and David Braben, there was none after. In 1984 when Elite was released, the BBC gaming scene was quite prolific. There were many companies releasing games, but the majority were simply rehashes of previous ideas, or arcade clones. Elite re-wrote the rules entirely. It has been ported to just about every other platform out there however, it appeared first on the BBC. 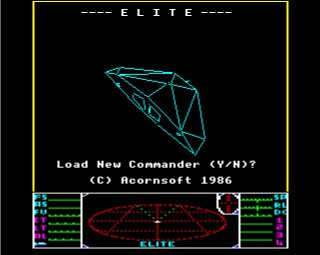 Elite for the BBC Master 128

In 1986, Superior software - who had by then bought Acornsoft - released an enhanced version of Elite. This version supported the BBC Master Series computer, and provided better graphics (using a different screen mode), different sound effects, additional missions, and lots more. It also loaded the entire game into memory, which in turn eliminated the constant disc accessing that plagued the original Elite.

The download here is slightly different to the one above, even though they both offer Master 128 versions of Elite. If the above version doesn't work, try this one.

During 1982-1983, Acornsoft published some very successful (and very difficult!) Text Adventure games. Although the games often had simple, limited interactive abilities, they used bizarre storylines and strong descriptions to overcome the limited "Verb Noun" input mechanism. Some of these were written by Peter Killworth, who later took many of his games to Topologika Ltd when Acornsoft stopped publishing adventure games. His most notable outing was Philosophers Quest, which included some very unfair puzzles and tricks.

I have still never completed this game. It has some very bizarre events and puzzles in it. For example, you have to use a Gas Mask to carry around a piece of very smelly Gorgonzola cheese. If you don't use the mask, you'll die of the poisonous fumes! This coupled with an Old lady wanting a cup of tea and you trying to find her missing dog, while dodging traps, spikes, etc. results in a positively surreal experience! (I have however finished the Topologika version of Philosophers Quest which is a much larger game - but fortunately has an on-line hints section!)

This was perhaps the weakest of all Acornsoft adventure games. The lack of a Save and restore option basically killed it. Add to that only a mildly interesting storyline, and not much in the way of descriptions. Now that you can play it on an emulator though, it's realistically possibble to complete it, as you can save the gamestate on emulators such as BeebWin.

Another Peter Killworth Adventure. This one is actually quite fun. It is easier than Philosophers Quest, and more fun than Sphinx Adventure (although Sphinx was not written by Peter). You have crashed on the planet of Doomawangara - Doom for short. You must find the appropriate spare parts for your space ship and get off planet Doom before it explodes.

I've started playing this game again, and I'm still stuck on it. This was another of Peter Killworth's tough adventures. It's full of some very unfair mazes, including one where you are guided by illuminous signs, so you have to walk through it, switching your lamp on and off. It also has some moderate to difficult riddles in it which have to be solved. It's interesting because I just don't think you would be able to get away with games like this these days. People wouldn't put up with how unfair some of the puzzles are.

Gateway to Karos was released in 1983 - after the Peter Killworth adventures. It had a very different feel and design compared to the previous Acornsoft adventures, and also contained a much more advanced parsar. It could understand more than two words, as long as the core sentence was still "verb noun". There were over 250 locations in Gateway to Karos, but my opinion is that many were highly reptetitious and contributed little to the overall dynamics of the game. Still, I've been told it's an enjoyable game by other people.


Other note worthy games from Acornsoft include:

Kingdom of Hamil - Another adventure game, similar in vein to the Sphinx Adventure.

Tetrapods - A highly original game where you must try and kill the bad guys by manipulating ball like devices which become creatures when you shoot them.

Firebug - A fun, platform game where you must put out fires and stop a boiler from overheating while a bad guy runs around creating more fires. Reminds a lot of people of their day jobs!

http://www.bbcmicrogames.com
Back to the Main Page.